Embedded in this post is a short film called ‘Photographic Memory’ directed by my lovely friend Lara Leslie of Cut Both Ways, an independent film production company.

The film was a collaborative project involving 160 Londoners and 30 disposable cameras; each contributor took a self portrait and two photos of something representative of ‘their’ London, then passed the camera onto someone else.

The challenge is to get 50,000 hits on Youtube in the next month. Working on the premise that the more you do, the more you can do and because I adore the film, I have volunteered to devote my mad skillz to achieving this objective. So I’m putting my reputation, my somewhat overstretched schedule and possibly my sense of reason and proportion on the line to prove it can be done…

The film itself neatly represents the development of social spaces and communities so vital in social media, epitomising content distribution through viral or word of mouth tactics and demonstrating the way in which our social networks can enrich our understanding of the world, allowing us to view the familiar in new and transformative ways.
It’s that rare moment when art, life and work all align, and the opportunity to put professional practice into something one is personally so passionate about doesn’t come along every day. Carpe diem…

So if you like the film, tell someone about it. If you like it a lot, tell a lot of people.

Here’s the link for your retweeting, posting and sharing pleasure: http://bit.ly/filmhit 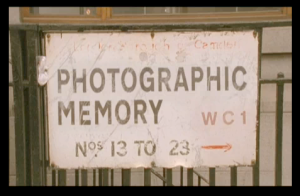 Update: the plug on this whole thing got pulled when life intruded. My grandmother died and so an emergency trip home meant I had neither time nor inclination to work on this.

I think the film got around 1000 views – a far cry from my intented goal, but I suppose every little helps.

One thought on “Social Media for Kicks: Photographic Memory”

the year of the cat by Cathie McGinn is licensed under a Creative Commons Attribution-Noncommercial-Share Alike 2.5 Australia License.